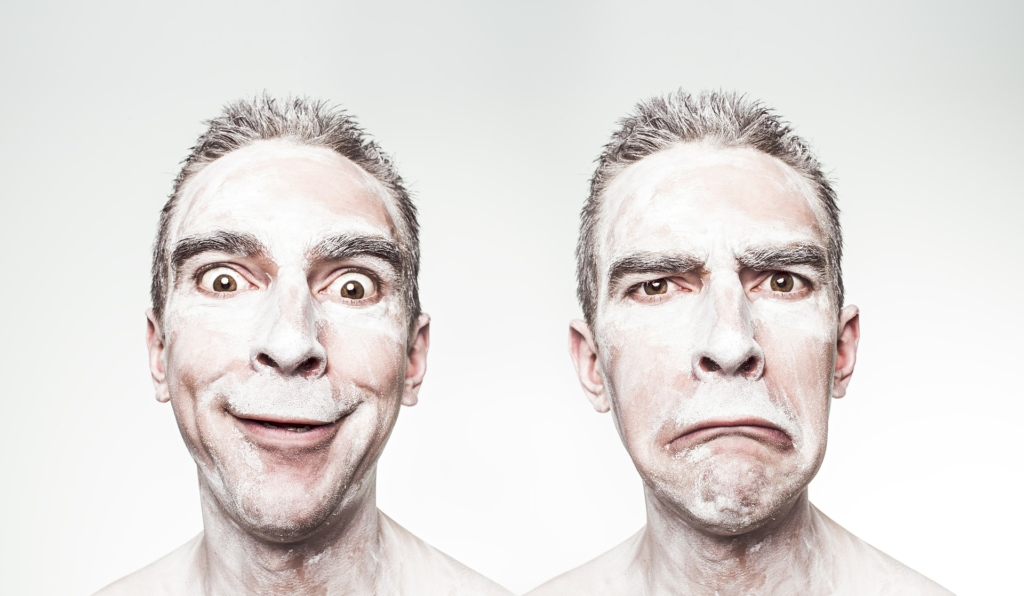 Right now I am very happy. Ecstatic even. I just finished the design of a study for my phd and because of that I had time to work on my novel. Later today I’ll meet a friend to hang out near a river. Life is good. But… I will be miserable.

Right now I feel great. But at some point in the future that moment of sweet happiness is over and I’ll feel just okay. And then some day I’m going to be sad, frustrated or angry. All emotions, negative or positive, are temporary and will fade after a while.

Take a look at this little diagram and see if it feels at all familiar. 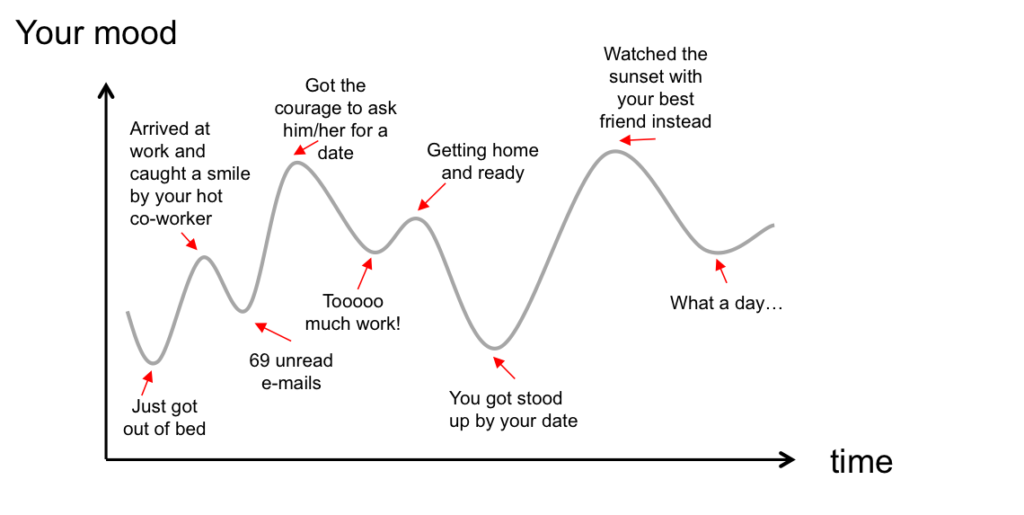 While it looks like someone is crazily rushing from happiness to unhappiness it’s usually the way we go through most of our days, though perhaps less extreme. We experience lots of emotions – some pleasant, some unpleasant. That’s just part of the human condition.

Emotional lows are followed by emotional highs and vice versa.

All of that would be fine if it were socially acceptable to be unhappy. But it’s not.

The trouble is that society tells us to „just be happy“. The strive for happiness has become the new American Dream after pursuing money was no longer in style.

At clubs people always ask me “Hey, how are you doing?”, with the kind of voice where they have already moved away to be able to hear more than “Fine, thanks.” You’re expected to be fine.

When someone looks sad we ask them what’s wrong. When children cry we shush them and tell them to shut up. And people get really uncomfortable when they see someone cry in public. It’s like saying “if you have to be unhappy, please do it elsewhere…”

Telling people to „just be happy“ creates pressure. What if we’re not able to do it right now? Maybe something really bad just happened or maybe we just can’t bring ourselves to feel good.

Now being unhappy is a new method for feeling inadequate because everyone is supposed to be laughing, singing and celebrating all the time. And sometimes this very pressure prevents us from actually being happy.

And that’s not the only problem. The norm to be happy also creates a nasty mind trick that does more harm than good. If we actually are happy we’re afraid that this happiness could go away.

And it is. But that’s just how things work and we don’t have need to worry about the shortness of these good moments.

So fuck that positivity bullshit. We don’t have to be happy at all times. It’s fine to just „feel okay“ or even be totally miserable sometimes.

What has Tiger Woods to do with all that?

We can be certain that just about any feelings will go away. They come up, last a while, and then they’re gone.

Since you spend most of your time in the „I’m okay“ interval, both happiness and unhappiness are actually extremes. And since they’re extreme, a mathematical concept called regression to the mean applies.

Let’s say Tiger Woods played a golf tournament. Cleary, he is one of the best golf players in the world, so it is likely that he is going to do well. But today, he played exceptionally. 15 holes below par, a world record, and much better than his personal average. But since this result is extreme, it’s very likely that the next day, he will play much worse. It is almost certain that his performance was in part due to luck (forces outside his control).

The same is true for your very happy and very unhappy moments. When you feel like the world is the absolute worst and everyone hates you, it’s likely bad luck and a evil combination of factors. But you will go back to your average soon after.

Conversely, when you’re really ecstatic, let’s say you just had your first baby, then soon after you’ll go back to your average (you can’t have your first baby every day of the week).

Mostly we feel that things are okay. We go to the extremes only sometimes. Then we feel great for a while or we feel terrible for a while. But we always come back to that middle range. Yes, there are still huge differences from person to person, some people have a bigger range, others have a different average, but that’s beside the point here.

The solution – How to ride the waves of happiness and unhappiness

When you find yourself in the extremes (happiness or unhappiness), first consider yourself lucky that you’re able to feel these emotions. They make you human.

There is a beautiful phrase that recovering alcoholics use: “This too shall pass.” They use this mantra to remind themselves that even the crappiest days full of craving for a drink will eventually end and a new day will come.

The same is true for your happiness. It too shall pass. Enjoy it while it lasts and remind yourself that this moment is precious and fleeting. Not every moment will be like this.

Don’t go chasing the highs and fearing the lows. Instead learn to ride them like waves in the ocean.

3 thoughts on “You will be miserable (and that’s okay)”